by Nick Gromicko
Lightning is the "visible discharge of static electricity within a cloud, between clouds or between the earth and a cloud," as defined by Underwriters Laboratories. Lightning is unpredictable and a serious threat to buildings and their occupants virtually everywhere. 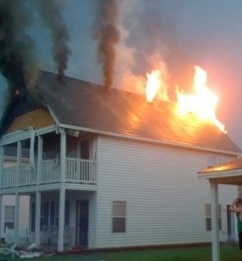 Types of dangers from lightning to houses and occupants:

CSST is a relatively new type of gas tubing that has been widely installed in houses and in commercial applications in recent years. Its small diameter makes it flexible and relatively easy to install when compared with traditional, rigid, heavy-walled pipes, although this same quality is believed to make it susceptible to fire due to lightning strikes. Lightning that travels down the CSST can burn holes in the tubing and allow gas leakage and fire. In the worst cases, gas leaks have led to disastrous gas explosions. CSST has been found to be susceptible to damage from direct and even nearby lightning strikes. 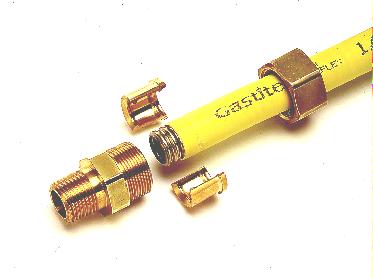 These claims have lead to a class-action lawsuit against manufacturers of CCST (Titeflex, Ward, OmegaFlex and Parker Hannifin) installed in homes as of September 5, 2006. Plaintiffs claim that the CSST tubing is not thick enough to prevent becoming damaged in the event of a lightning strike, and that CSST manufacturers failed to warn consumers about such dangers. The defendants claim that CSST is safe if properly installed, in accordance with local codes and the manufacturers’ instructions. According to the Lightning Protection Institute, dangerous CSST has been installed in more than a million homes in the United States.

Typically, these products may be visible in attic spaces, along floor joists, above basements, or connected to exposed appliances, such as water heaters. The piping can be identified by its manufacturer’s mark, each of which are listed below:

Additional bonding to ground is recommended for houses with CSST.

Safety tips for clients during thunderstorms:

Lightning protection systems are devices intended to divert lightning into low-resistance paths to or from the earth and away from non-conducting parts of a structure. For specific inspection instructions regarding these systems, see the National Fire Protection Agency’s NFPA-780.

Metal rods are fastened to the building to intercept electric discharges that might otherwise strike a building component itself, such as a chimney or metal roof. Electrical discharges striking the air terminal are directed through metal conductors to a grounding system and thence into the earth.
Controversy has existed for centuries concerning whether lightning rods should have blunt or sharp tips. Recent studies have found that moderately blunt metal rods are better lightning-strike receptors than sharper rods or very blunt rods.
In summary, lightning can be very dangerous to homes and occupants, although devices and measures exist to limit this danger.
Protect Your Property From Water Damage
Plumbing Terms